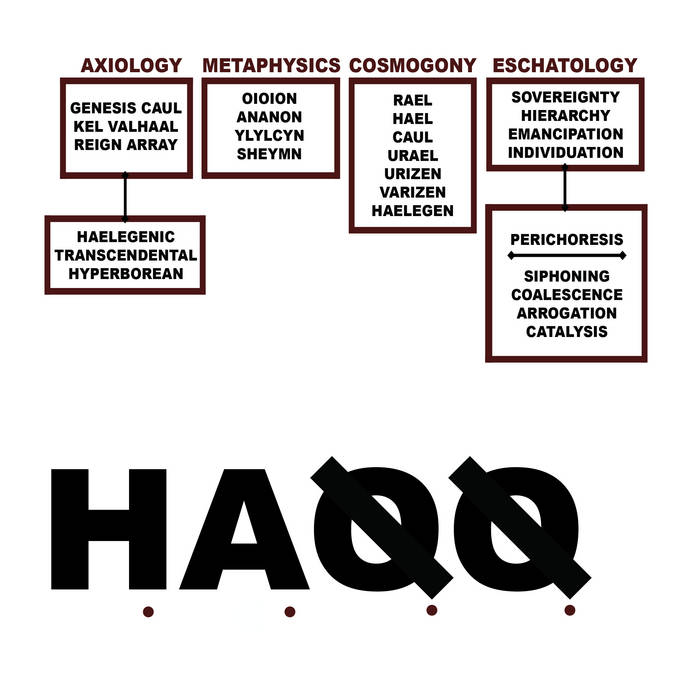 Craig Tinney Exceeds it's own goals and thensome, truley transcendental.

Haters be dammed, trve kvlt black metal or not, this album is an absolute scorcher. Favorite track: PASAQALIA.

schmedess One of my favorite black metal releases of the 2010's. So creative, so powerful, and heavy. I have a blast listening to this every time I hear it. Favorite track: HAJJ.

H.A.Q.Q. is the fourth studio album by transcendental black metal band Liturgy. Featuring their characteristic yearning guitar harmonies, epic song structures, and intense drumming, H.A.Q.Q. boils over with harp, piano, gagaku ensemble, pitched percussion, strings, and digital manipulation. It represents a consolidation of the band’s sound to date, a combination of the mathematical complexity of 2011’s Aesthethica and the glitchy experimental fervor of 2015’s The Ark Work. While ecstatically invoking heaven, H.A.Q.Q. is also Liturgy’s most vulnerable record for Hunter Hunt-Hendrix, addressing anger and struggles around mental health, sexuality, and religion. In part a reflection on Liturgy’s uniquely controversial career, it attempts to render the spirit of a cultural era whose basic fabric is unravelling, and to generate an energy of prophecy and love in the name of what is to come.

Hunt-Hendrix composed the album during 2018, drawing from a reservoir of material, some of which had existed for years, while simultaneously creating the forthcoming opera Origin of the Alimonies and philosophical System of Transcendental Qabala (depicted graphically on H.A.Q.Q.’s album cover). These latter two projects represent an interdisciplinary effort to create a total meaning system. The composition of H.A.Q.Q. was a sudden detour, but it is related to these other works as a point of entry. After performing in the debut of Origin of the Alimonies in the fall of 2018, the band spent 6 months bringing the album to life before recording it in August of 2019 at Machines with Magnets with Seth Manchester.

H.A.Q.Q. stands for Haelegen above Quality and Quantity, and represents Hunt-Hendrix’s uniquely marxist and psychoanalytic vision of God.

all songs composed and arranged by Hunter Hunt-Hendrix

Recorded in August 2019 and mixed by Seth Manchester at Machines with Magnets. Mastered by Matt Colton at Metropolis Mastering

Liturgy is the project of Hunter Hunt-Hendrix, whose yearning, energetic “transcendental black metal” exists in the space between metal, experimental, classical music and sacred ritual. The band is simultaneously a platform for art and theology, and is a controversial presence in contemporary music. ... more

Bandcamp Daily  your guide to the world of Bandcamp

Serena Cherry debuts her black metal project, plus a Pick from the Crypt block from Svalbard